What Do We Do When Our Speech is Banned? 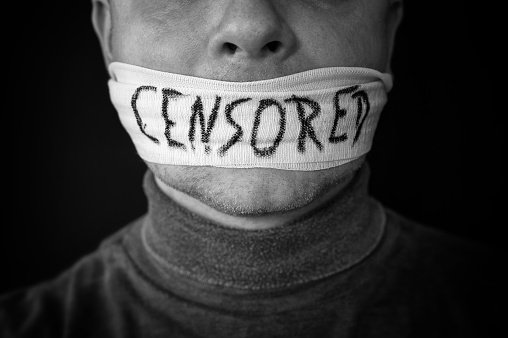 There are a number of things that greatly concern me about the current “cancel culture,” this idea that when you disagree with someone you just shut them down and take away their platform.  The idea that anything that goes against the majority view (and that is not the Christian view) must be silenced or anything that does not agree with prevailing culture is “hate speech” is a dangerous one.  Diane and I had a conversation about the fact that if someone combed through the archives of my preaching (now numbering hundreds of message on the internet, available 24/7), they might choose to label much of what I say as “hate speech.”  I know I do not do this anywhere close to perfectly, but my goal is to always follow Ephesians 4:15 and “speak the truth in love.” However, my assignment is to speak the truth.  Whether the message is welcomed or not, I plan to continue speaking the truth.

With all of that in mind, I wanted to share with you a thought-provoking article from Dr. Jim Denison who authors “The Denison Report.”  I hope you gain important insights from Dr. Denison’s thoughts.

The Daily Citizen is a publication of Focus on the Family. On January 19, it tweeted that President Biden’s nominee for assistant secretary of health, Rachel Levine, is “a transgender woman, that is, a man who believes he is a woman.” The story included a link to an article about the nomination.

As a result, Twitter locked the magazine out of its account, informing the publication that its tweet violated Twitter’s user rules forbidding “hateful conduct” and violence

The magazine insisted that it never promoted violence: “As a Christian organization, we would never do so. We simply explained to our readers the appointment and defined what transgender women are—those born male who believe they are a woman, regardless of whether they have had opposite-sex hormones or surgeries. We believe Twitter’s blocking of this tweet and lockdown of our account discriminates against Focus on the Family’s The Daily Citizen on the basis of our religious affiliation.”

The social media platform rejected the appeal and said its ban would not be overturned.

In related news, a New Testament professor at Houston Baptist University was suspended from Facebook for voicing disagreement with President Biden’s executive order allowing trans-identifying individuals to serve in the US military. Robert Gagnon (PhD, Princeton Theological Seminary) is a well-known scholar on the subject of human sexuality. He was locked out of his Facebook account for twenty-four hours after he posted a comment defending a friend who posted a satirical comment about the executive order.

In his post, Dr. Gagnon said the executive order will endanger women. He likened transgender ideology to a “religious cult” and said it “is indeed a pseudo-science” in that it forces people to reject basic biology. Facebook notified him that his words violated their “Community Standards on violence and incitement.”

Dr. Gagnon responded, “There was absolutely no incitement to violence on our part. We abhor violence done to any person. This is just a thinly veiled and pathetic excuse for censorship of any critical views toward trans-tyranny over our consciences, religion, and reason.” After his suspension was lifted, Dr. Gagnon posted on his page, “We are in the midst of rapidly accelerating public censorship of our views.”

Renowned Princeton professor Robert P. George condemned Facebook’s attack on Dr. Gagnon: “Censorship on Facebook and some other social media has now gone way beyond the bounds of the reasonable.” He added, “People need to be able to criticize and forcefully challenge ideas—including ideas that are dominant in elite sectors of the culture and among people in the tech industry. What we do NOT need is the silencing of dissent.” He warned, “Once it starts and becomes normalized . . . things do not end well.”

What is hate speech?

Twitter’s rules include this statement regarding “hateful conduct”: “You may not promote violence against, threaten, or harass other people on the basis of race, ethnicity, national origin, caste, sexual orientation, gender, gender identity, religious affiliation, age, disability, or serious disease.” The platform adds that it prohibits “content that intends to dehumanize, degrade, or reinforce negative or harmful stereotypes about a protected category.”

Let me be clear: no one should do what Twitter and Facebook prohibit. Christians should be especially adamant here, remembering that God’s word explicitly forbids slander (Psalm 101:5; Proverbs 10:18) and commands us, “Do not speak evil against one another” (James 4:11).

Here’s the problem: biblical morality with regard to LGBTQ behavior is considered “hateful conduct” by some LGBTQ persons. They view biblical prohibitions against homosexual activity as homophobic prejudice. If an individual claims that an article expressing such prohibitions is “dehumanizing speech” or a statement of “inferiority,” that article could be blocked by social media.

Even if the writer avoids any language that could be objectively viewed as hateful, the expression of biblical morality could be enough to provoke censorship.

Speaking the truth in love

How should Christians respond?

One: Make clear the fact that God loves all people, whatever their sexual orientation or gender identity.
Our language should always reflect his passion and compassion for all people. We are all broken and sinful (Romans 3:23). We are all in need of grace (Ephesians 2:8–9). As a result, we must always speak the truth in love (Ephesians 4:15). Speech that slanders is sinful.

Two: Speak biblical truth with clarity and grace.
Our culture needs to hear God’s word on sexual identity and morality because his word is best for us and his will is “perfect” (Romans 12:2). For example, as Ryan T. Anderson recently noted in the Wall Street Journal, the claims that an unborn child is a child and that girls should not have to compete athletically with boys are not only religious in nature but statements of fact. We should assert that our beliefs “are true, not merely protected in law.”

Three: Pay the price of our convictions.
If (or when) orthodox biblical morality that has been affirmed for more than twenty centuries becomes castigated as “hate speech,” we can choose to be silenced or we can choose to be courageous. At that time, we should remember Jesus’ promise: “Blessed are those who are persecuted for righteousness’ sake, for theirs is the kingdom of heaven” (Matthew 5:10).

However, we must love all people and speak truth with grace to claim this promise. If we are “persecuted” because our words and actions have been less than godly, we dishonor our Lord and hinder his kingdom.

How to respond to opposition

As followers of Jesus, we are to declare and defend biblical morality “with gentleness and respect” (1 Peter 3:15). This does not guarantee that we will not be censored or vilified. In fact, the next verse states, “when you are slandered” (v. 16a), not “if.”

But if we have spoken the truth in love, we are assured that “those who revile your good behavior in Christ may be put to shame” (v. 16b). The more we respond to opposition with grace, the more we glorify our Lord.

Would you pray for God’s Spirit to manifest the courage and character of God’s Son in your words today?