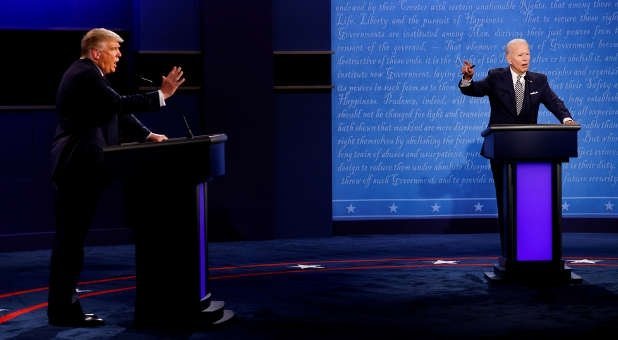 We are now very close to election day.  Most of us have been praying, fervently, daily, as we head to this critical time in the life of our nation.

Each week I receive a blog from J. Lee Grady entitled, “Fire in My Bones.” His insights have often been very helpful to me.  In this week’s blog, he is encouraging readers to pray specifically for the upcoming election.  Spoiler Alert: You may not agree with everything he suggests here – but I urge you to do the specific praying that he advises.  Here are the thoughts of J. Lee Grady:

I remember the Civil Rights era and the Vietnam War. I even remember the assassination of John F. Kennedy and Martin Luther King Jr. And of course I was alive during the Watergate scandal, President Nixon’s resignation, the collapse of the Soviet Union, the Iraq War, the Clinton scandal and 9/11.

All those times were turbulent. But I’ve never known anything as intense as 2020. The combination of a global pandemic, mass unemployment, the George Floyd killing, street protests, antifa riots, forest fires, hurricanes and the most polarizing presidential election in our history has made this the most intense year I’ve ever known.

All this turmoil has sent me to my knees. I’ve prayed and fasted—for racial healing, for peace in our cities, for our divided leaders and for protection for my 92-year-old mother who is in a nursing home and vulnerable to COVID-19.

While I was praying for the election recently, I had a strong visual impression. I saw a voting machine in front of a dark curtain. Then I saw a hand coming out from behind the curtain, moving slowly toward the back of the device. I knew the Holy Spirit was telling me that sinister forces were at work to manipulate this election. I was able to pray with insight because the Lord gave me a clear picture of what is happening.

As Americans go to the polls over the next 14 days—with some standing in lines and others mailing in ballots—we need to soak this election in serious prayer. 2020 is not a normal year. Spiritual alarms are sounding, and God is calling His intercessors to be the first responders to this crisis.

Pray for the exposure of corrupt behavior, regardless of party affiliation. God sees what is done in secret. Pray that those who pull strings to unfairly manipulate an outcome will be brought to justice. Pray that poll workers as well as city and county officials will lead with integrity to stop all attempts at cheating.

When I was young, journalists were committed to objectivity, and they rarely showed bias. Today I use quote marks around the word “journalist” because most reporters are driven by an obvious political agenda. Headlines have become propaganda. Important stories are buried. And gullible Americans have been hypnotized by the media’s spin doctors.

Pray that this deceptive spell is broken. Bind the power of misinformation and indoctrination. Pray that people will think for themselves rather than being pressured to conform to groupthink—not only as it comes from television and newspapers but also from big tech companies that have demonstrated blatant willingness to censor information that doesn’t match their preferred narrative. (That includes Twitter, Facebook and Google.)

Ask for God’s divine intervention. Pray that voters will accept the results of the election with dignity and that God will help us love each other across this bitter political divide. And most of all, bind the forces of anarchy and violence, whether they come from the left or the right.

King David prayed: “Let there be no outcry in our streets!” (Ps. 144:14b). My prayer is similar: “Lord, have mercy on America. Protect our cities from looting, shootings and mayhem. We cancel the power of the assassin’s bullets and the anarchist’s bricks. Deliver us from evil and establish Your righteousness and justice in our nation. In Jesus’ name, amen.”