It Would Be Quite an Amazing Interview 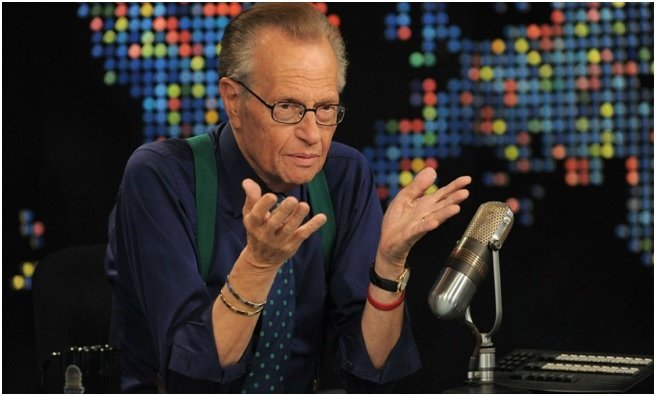 Larry King passed away last weekend.  Arguably, he was the most famous broadcaster of this generation.  Larry King interviewed more than 50,000 people during his career – royals, Hollywood stars, political leaders, celebrity pastors, sports champions and famous criminals are on the list of people that have sat down across the interview desk from Larry King.  I put the picture above because that is how a I picture King – dressed in the trademark suspenders, in front of the multi-colored background and behind the microphone.  Larry King was 87 years old, was married 8 times to 7 different women.  He had five children, two of his children preceded him in death.

I thought that was quite a revelation.  I also cannot help but say that it gave me a tinge of sadness that Larry King may have gone to his grave without an answer to that all-important question.  I can only hope that one of the celebrity pastors that sat across from King – from Robert Jeffress to Joel Osteen to Max Lucado to Rick Warren might have provided him the answer he was seeking to his one question for God.

Almighty God does not sit for interviews – not even for Larry King.  He did, however, write a book.  In that book, The Bible, the Lord provides the most straightforward answer to Larry King’s one great question that he would ask God.

I hope we all realize that the answer to the question of the identity of the Son of God is one of eternal significance.  We need to be clear on the fact that not only does Jesus exist, but that he is Lord of heaven and earth and our only Savior.  Our personal answer to Larry King’s one question for God makes an eternal difference.