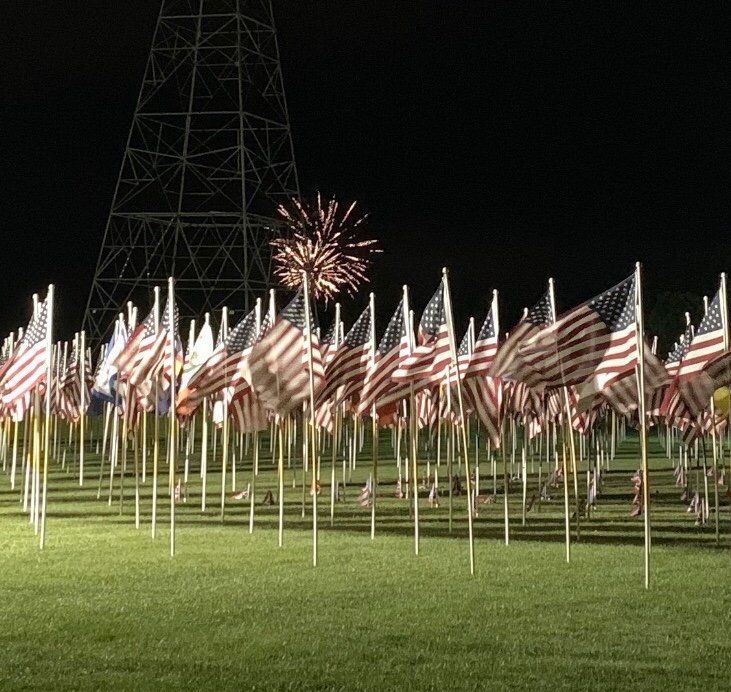 The Ohio Flags of Honor Traveling Memorial is now history.  The Farewell Event for this amazing memorial concluded at around noon on Monday, July 5 on our campus. For one final time, the flags of the 302 fallen men and women from Ohio who have been killed in battle since 2001 flew together.  Many of the flags have already been retired and given to the family members of the fallen.

It was a tremendous honor and privilege to host this Farewell Event on our campus.  The partnership with the City of Groveport and the Groveport Fourth of July Celebration made it possible for us to do this in a grand fashion.  John Connett led many volunteers and teams of volunteers that worked like crazy, giving countless hours to make this a first-class event in every way.  All of us gained an appreciation for Gino Zimmer and Angelo Nuzzo and the work that they have done over the last 16 years taking this memorial all over the state of Ohio.

The memorial was open 24 hours a day, lighted at night.  The photo above was taken by Phil Mowbray, capturing not only the memorial but also the fireworks from Obetz.

The Bible says in Roman 13:7 that we should “give honor to whom honor is due.”  This was our humble attempt to do exactly that, and express appreciation for the sacrifice of the fallen and their families.  Thank you so much for being part of this experience.